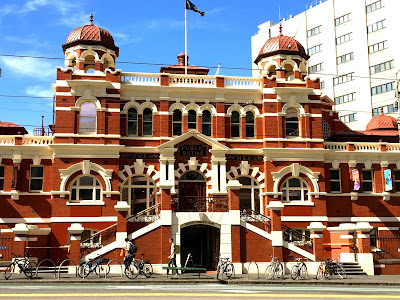 The putrescent odours emanated from human and animal excrement travelled along the streets in absolute liberty, creating pungent chemical reactions with the rubbish heaps displayed openly before the city premises, and market refuse exhibited at the main roads like some scattered confetti after a wild party. Thick clouds of dust enveloped the entire city littered with stinky carcasses of different kinds. Taking a bath is a luxurious activity to be partaken by the city dwellers once a week. In humid hot summer days, human beings smelt the same as their surrounding, saturated with ubiquitous stinky horse urine and filthy decomposing garbage.

And no, I am not talking about the Ganges River in India. This was a scene of the infant Melbourne city in the 19th century, where stench, pollution and epidemics were inseparable buddies of this obnoxious town.

The concerns for infectious disease and personal hygiene soon became a matter of utmost urgency; the establishment of Public Baths became an incumbent need that required desperate initiations. And so, a triangular piece of land surrounded by Swanston, Franklin and Victoria Streets was selected, and the first City Bathhouse (with poor workmanship) was completed and opened for the use of public in January 1860. The Public Baths became the latest hype in town where people gathered faithfully in joyous mood in anticipation of some refreshing dips.

The building soon deteriorated to an unbearable state, and was closed down in 1899. But this was just the beginning for a revival of a better and more ambitious Public Bathhouse. National competition for a light and cheerful Public Baths design was organized. The competition was won by one of Melbourne’s most notable architects, J. J. Clark (who also designed the Melbourne’s Treasury Building). An awesome Edwardian Baroque building lined with striking red bricks, symmetrical façade and domed rooftops was built, and the new bathhouse was reopened to the public in April 1904. 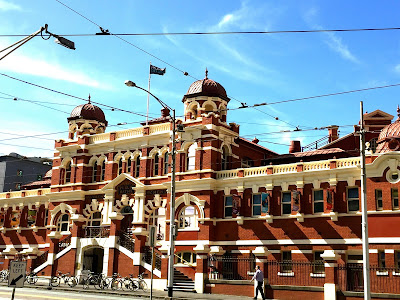 It is hard to ignore the presence of this stylish and heritage-listed architectural building without giving it a careful glance. Gone were the days when sexual segregation and class division were important characters of the building. Men and women were to enter through separate entrances; Women bath was to be out of public gaze while men bath was designed with potential public contests and open entertainments in mind.  Second class baths were hidden in the basement, while the upper class enjoyed the main floor space.

Today, this stunning building houses the largest swimming pool in the city, a modern gym, spa, sauna and squash courts. The Baths have become a cool venue of amenities for sports and healthy lifestyle. The historical origin of this Public Bathhouse are facts and matters difficult to be comprehended by the modern city, and belongs purely to the bygone era.

Email ThisBlogThis!Share to TwitterShare to FacebookShare to Pinterest
Labels: Architecture, History, Where To Go, Within CBD