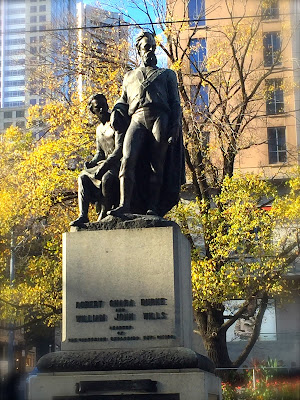 The Burke and Wills story, a supposedly heroic tale encapsulates all the perfect ingredients of a potentially successful blockbuster: A noble mission to unfold riddles of inner continent, starving explorers confronting unknown wilderness at the far north of Melbourne, tough endurance of formidable desert, a journey beset with scarcity of foods and treacherous weather. The legend ended with tragic deaths of the protagonists and a posthumously erected Michelangelo-style sculpture. With a little sprinkle of skilled cinematography and euphonic sound mixing, the story might have easily turned into the next Oscar-winning Revenant.

Yet how we wish the over-glorification could be justified without a pang a doubt. For despite the glorious height of the public monument and the overwhelming public sentiment in the 1860s, the Burke and Wills expedition is a testament of foolhardiness and incompetence, an ignominious defeat tainted with too many blunders and human follies. 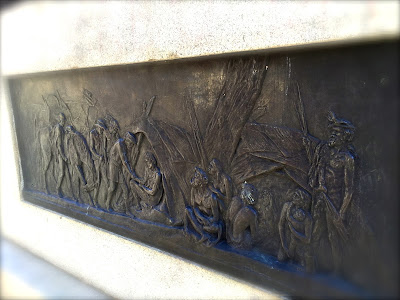 Led by the inexperienced Burke, the grand expedition was almost doomed to fail from the outset. Just few weeks after setting off from the Marvelous Melbourne, an ill-conceived plan and ineptitude leadership caused successive resignations and departures of expedition members. Series of error of judgment saw the disposal of various stores and supplies, a foolish action proved to be fatal in hindsight. News of a rival continental-crossing plan from home triggered Burke’s insecurity and anxiety, the last straw that eventuated the rash decision of the strong-headed leader to split the team and race more than 1000 km towards Gulf Carpentaria in the fiercest December heat of 50° C. They walked a remarkable 3500 km from Melbourne, almost reached their intended destination, prevented only by the mangrove swamps. 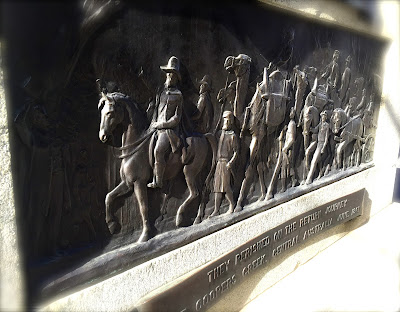 Camels and the only horse were slaughtered and eaten on the return journey. Attacks of Monsoonal rain and dysentery ended the life of Gray and brought the exhausted Burke, Wills and King to the brink of weariness. Upon arriving the Cooper Creek depot, the emaciated Burke team was greeted by a deserted camp and an instruction to dig carved into a tree trunk. Inadequate supplies were unearthed, found alongside a devastated message left by the remaining expedition members, notifying the trio that they had arrived too late for the rendezvous. 9 hours too late, to be exact. Arrogant to the end, Burke refused to accept help of the Yandruwandha people, and even, antagonized the indigenous by ridiculously fired his pistol at one of them. Both Burke and Wills died about 10 weeks later. King survived, having accepted the hospitality of the Aborigines. 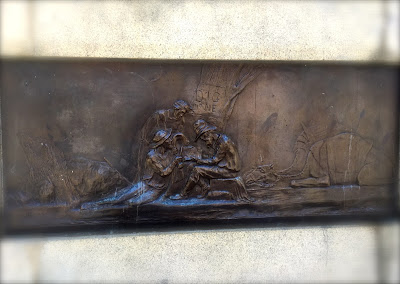 The Burke and Wills statue was commissioned and built, placed above a base of granite plinth with four bronze relief panels depicting the significant scenes from the expedition positioned at each direction of the pedestal. Designed by the Australian sculptor Charles Summer, the gigantic sculpture suffered almost the same nomadic life as its original characters since it was unveiled in 1865. Like a foreign sojourner in search for a permanent residence, the statue was moved from one place to another almost endlessly and tiringly. 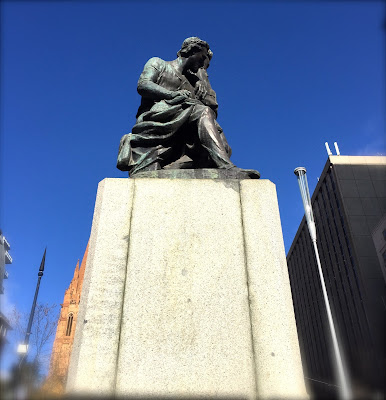 The intersection of Collins and Russell streets was a short sweet habitation till the arrival of cable trams forced its removal to Spring Street in 1886. Increased traffic around the Parliament and the development of the Underground Rail Loop prompted its eviction in 1973, and saw the enigmatic duo being relocated to the southeast corner of Carlton Gardens. A short 6 years later, the Burke and Wills statue was moved again and settled at the unpopular City Square. A short trip was made to Fitzroy for restoration work, and the huge monument was re-erected prominently at its present location at the corner of Swanston and Collins streets in 1993. With the impending development of Melbourne Metro Rail and plans to take over the City Square, it remains to be seen whether any ill-fate will soon befall the Burke-Wills team again.

Corner of Swanston and Collins Streets
Posted by Melbourne, Mama & Toys at 08:57 No comments:

Email ThisBlogThis!Share to TwitterShare to FacebookShare to Pinterest
Labels: Art, Free Admission, Sculpture, Where To Go, Within CBD 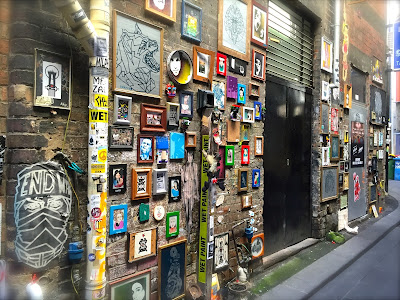 Like a secret meant to be kept, the entry point of Presgrave Place looks too ordinary with no hint of any impending surprises. Hidden within a lane branched off from the Little Collins Street, this melancholy-looking dead-end alley gives no clue of any uniqueness. It is sad and sticky, with rows of boring restaurant ventilators emitting greasy odour, dirty commercial wheelie bins forming unexcited queues, and a few locals nonchalantly puffing cigarettes while gazing vacantly ahead. Yet like a mischievous prank well played, a group of artists cheekily installed a collection of eccentric assemblages and framed artworks there, discreetly displayed on one side of the wall, waiting for unexpected wanderers to chance upon the artsy discovery.

Here, we can find Mikonik’s signature stenciled portraits on jigsaw in its inimitable pop-art style, alongside the various hand-drawn and paste-up faces by 2b/bsc/bsc basics in its plain but iconic form. The abstract geometrical arts by artsakebyscott, the serious lines by Sunfigo, and the harmonious shades of colour by luv [sic] shared a space on the eroded brick wall, adding a modern sense of coolness to the kaleidoscopic backdrop. Tinky’s miniature Mona Lisa was attacked by two soldier figurines, whilst his plastic red army launched a siege on the fortified gallery of art. 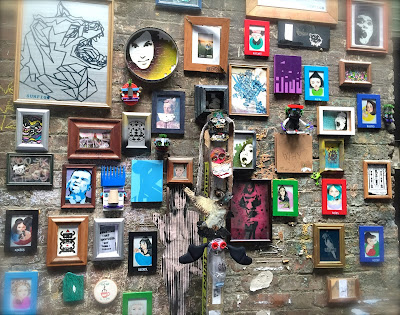 It won’t do Presgrave Place justice without mention of the controversial Kranky and his art installations ranging from the partially eerie to the downright gruesome kind. Think bloody Barbie dolls, hideous rats and deathly spiders. There were also footprints left behind by unknown artists in the form of yellow crocheted jellyfish and miscellaneous decals or paste-ups. 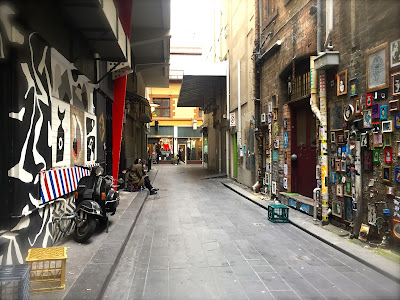 My personal favourite is the framed illustrations of semi-circular faces with hint of exaggerated oddness done by the prolific Alice Rex. The paintings are deceptively innocent and spellbindingly sweet, like some distorted scenes of fairy-tales went wrong. From time to time, curious thieves ran silent rampages and carried away pieces of art, leaving trails of vandalism in the process. Alice Rex’s masterpieces were, unfortunately, one of those aesthetic objects targeted constantly by the nighttime Ninja, disappearing without a trace for too many a time. 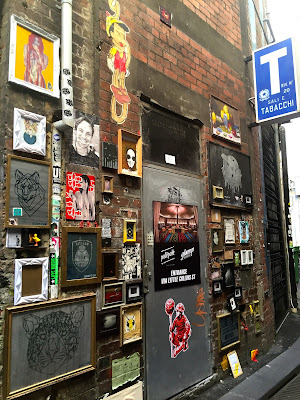 Off Howey Place, between Elizabeth and Swanston Streets, just south of Little Collins Street
Posted by Melbourne, Mama & Toys at 05:55 No comments: 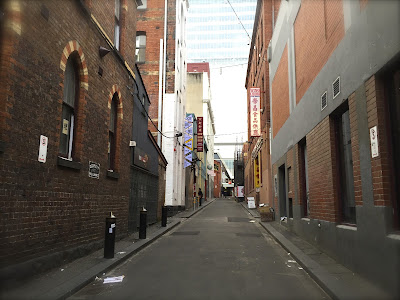 Known as the Weeping Philosopher, Heraclitus of Ephesus was a self-taught sage and a depressive misanthrope. He hated the mankind and grieved at the folly of all men. He was known to lead a secluded life and fed on grasses. In China, there was a learned and ascetic intellectual called Lao Tzu. Having witnessed the morally corrupt life in the imperial court, Lao Tzu grew weary and disillusioned, and subsequently commenced a life as a hermit.

Heraclitus talked about the unity of opposites: a universe of constant change (you can never step twice into the same ever-flowing stream) yet with the same underlying law. Lao Tzu talked about the constant interaction of Yin and Yang, an emphasis on universal oneness and its opposing manifestations in duality (male and female, summer and winter). Heraclitus’s sayings were obscure and shrouded with incomprehensible riddles and paradoxes. Lao Tzu’s Tao Te Ching is a valuable text written vaguely in classical Chinese, with deeper meanings hidden underneath various analogies, rhymes and ancient sayings. 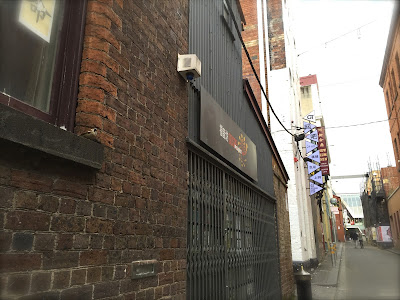 A seemingly typical asphalt laneway linking Lonsdale and Little Bourke Streets, Heffernan Lane silently imparts classic words of wisdom to the daily pedestrians. Heffernan Lane is Melbourne’s very own path of philosophers, a narrow passageway adorned with wise sayings from the East and West, thanks to the creative installation of artist Evangelos Sakaris. Unassuming signage bearing sacred texts of Heraclitus and Lao Tzu are tucked and scattered along the quiet laneway connecting the romantic Greek Precinct on the north and the bustling China Town on the south. 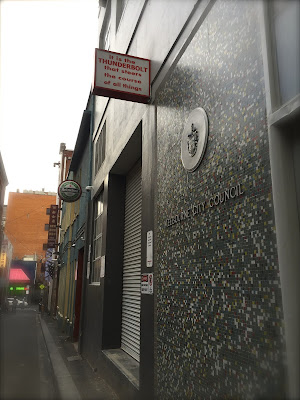 Pedestrians treading the footpath are mentally challenged and spiritually invigorated. We are reminded of the value of the intangible and emptiness, for after all, it is the holes within that make a room useful. We are urged to remember the true “thunderbolt” that steers and in control of all things, to dwell on substance rather than on the deceiving surface of things. Unsolicited yet useful advice and golden rules in life are generously offered to patrons of Wing Cheong Asian grocery store, diners of casual Chinese culinary New Kum Den, happy pub-goers at Union Electric and other random passersby, if only they could decelerate their walking speed, pause and ponder, and be prepared to get lost in thought. 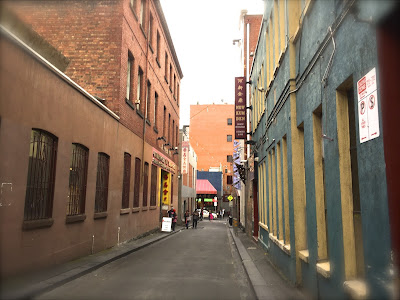 Location:
Between Russell and Swanston Streets, connecting Little Bourke and Lonsdale Streets
Posted by Melbourne, Mama & Toys at 08:48 No comments: