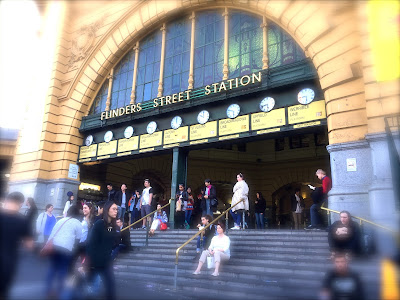 Two attractive youngsters met by chance beneath the clocks at Flinders Street Station on a lovely summer evening in December 1949. The next morning, one was found dead; one was arrested and tried for the sensational murder that gripped the Melbourne city passionately for the next few years. John Bryan Kerr was convicted of murder after the third trial - an offence that the charismatic and well groomed Kerr maintained his innocence throughout till the day of his death.

Thanks God, not all rendezvous under this grand arched entrance ended up in uninvited drama. Strategically located at the corner of Flinders and Swanston Streets, the prominent dome and those numerous clocks displayed underneath it have become the most recognizable urban landmark of Melbourne. The phrase “I’ll meet you under the clocks” became an idiom exclusive to this young city and a sweet tradition that the Melbournians have steadfastly upheld for more than a century.

The façade of this elegant Baroque masterpiece has proudly served its role as the most frenzied meeting place of both rail commuters and non-rail commuters. Lovers waited at the elegant wide front steps in their best suits, with butterflies fluttering in their stomach while trying to conceal a nervous smile. Best buddies sat with their legs crossed on the staircase while shouting grumpily on the phone, chastising the late comers who would soon be joining them for a great night out. 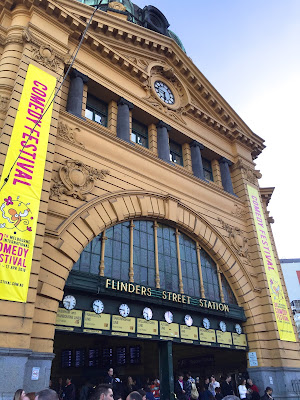 The scene at the entrance is as chaotic as the row of clocks above them. The hands of each clock point at different directions, like a row of ballerinas who disastrously forgot to synchronize their dance moves. No, nothing is wrong with these ordinary looking white clocks. They are there to perform a faithful service of reminding the commuters the time of departure for the next trains on each line.

The clocks were rescued by the Melbournians in 1983, when a proposal of replacing this row of Plain Jane with fancy digital clocks was met with public outcry that compelled the decision to be dropped. Today, these old white clocks remain proudly on their respective thrones, although they are now operated by computers, instead of being adjusted by hand as they once were.
Location:
Flinders Street, Melbourne (corner of Swanston Street).
Posted by Melbourne, Mama & Toys at 06:32