Hanging Rock- a place made famous by a movie 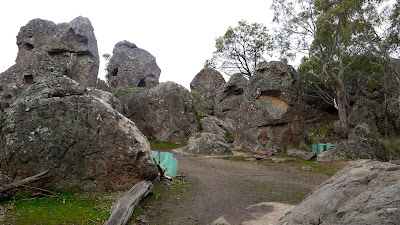 I was alone in the pitch-dark discovery centre of the Hanging Rock (having just descended from the rocks), watching a movie trailer of some young girls in long-lacy white Edwardian dresses running in fright amidst the background of numerous mysterious grayish stones. A ghost-like female voice echoed spookily “Miranda, come back, Miranda!”

It gave me goose bumps and I felt a chill ran down my spine.

So the story goes; On Valentine’s Day in 1900, some schoolgirls and teachers went for a picnic at this seemingly haunted place called Hanging Rock. Then came the tragedy when a few of the girls went missing. Some came back with lost memory, a few inexplicable deaths, and the story ended with the gloomy suicide of the headmistress.

But not to worry, this eerie story is apparently fictional. The story was made famous by a mystery drama film called “Picnic at Hanging Rock” adapted from a novel of the same name by Joan Lindsay. So most probably than not, the place is not haunted after all!

The film received critical success and won several accolades around the world after its release on 7 August 1975. The unresolved mystery of the story still provokes controversy to this day as viewers are still trying to figure out what exactly has happened to the girls.

I visited the Hanging Rock recently when a friend insisted of driving out of the city for some “meditative and self-reflective moment”. So we drove our rented car around an hour or 80 km away to the North of Melbourne. After a few wrong turns and some frantic moments consulting the Google map, we arrived at the destination, exhausted and eager for a quick toilet-break and an adventurous exploration.

Below are some of the reasons why you might want to visit the Hanging Rock: 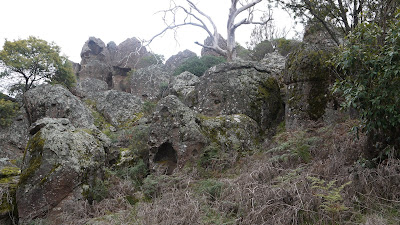 According to the official website, Hanging Rock is the “best example of a volcanic plug or mamelon in the world”. Another website claims that the rocks were “formed by an upheaval of lava millions of years ago”.

The place is apparently also listed on the Victorian Heritage Register as a place of historical, aesthetic and social significance to the State of Victoria. 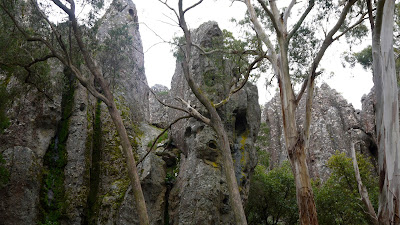 There are innumerable rocks of unusual shapes and sizes along the way up to the top. And I swear some of those rocks were eerily staring and gnashing their teeth at me when I walked past. You can be the judge!

And of course, the sight of the flat plain and farmland (with cute little lego-size houses dotting here and there) viewing from the summit of those massive rocks was kind of breathtaking. So definitely a place to visit if you would love to enjoy a great view and eager for some physical exercises of rock climbing! 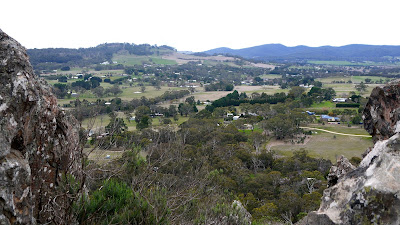 The climbing process was relatively easy without the need of any aiding equipment (maybe a walking stick and a nice pair of rock climbing shoes will do).

But I did find negotiating with those deceptively innocent huge rocks while maintaining my balance on top of those uneven edges to be quite a challenge. So maybe you might want to think twice (or thrice) before bringing your one-year-old baby or your parents of over 70s here. The rocks can be pretty steep! But I did see some young children running up the rocks in an excited speed without a pause, so I guess the level of difficulty really depends on how physically fit a climber is. 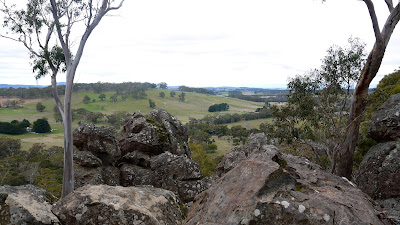 Entry is charged per vehicle. $10 per vehicle, paid at a machine at the café where an exit ticket is dispensed (and where a friendly kangaroo could be found).

Email ThisBlogThis!Share to TwitterShare to FacebookShare to Pinterest
Labels: Nature, Outside CBD, Where To Go