Heirloom and its delightful desserts at special rate 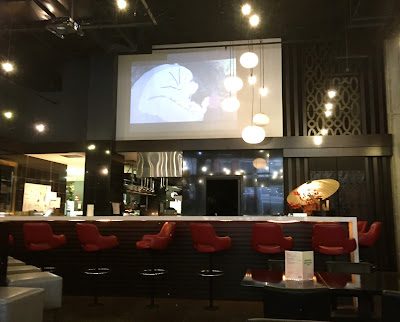 Heirloom of Bourke Street is an icon of confusion, a perplexed modern venue decorated with Japanese items at every nook and corner. The façade is dominated by a contemporary full-length glass window stenciled with its Kanji’s name, arranged in the style of traditional calligraphic seal. The extravagant interior is a sea of glistening black and flaming red, with a sports-bar type projected screen placed prominently before a row of red swivel bar stools. Bottles of Japanese alcoholic beverages seated ostentatiously on a fancy octagon shelf amidst its collection of drinking glasses and oriental lantern. Bright red Tolix metal dining chairs and painting of formidable Edo-era Shoguns inhabit under the same roof, forming a bold picture comprises both rustic industrial and old-style interior. 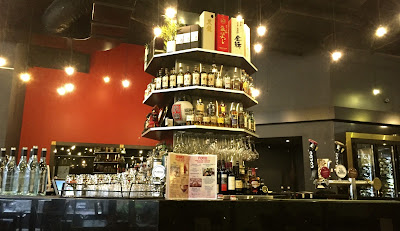 The restaurant serves crushed avocado and cereal in the morning, Bento box and Teishoku sets in the afternoon, and chef-selected Omakase Nigiri sushi by night. Japanese Asahi, Yamazaki and Hakkaisan are served side by side with its Western counterparts of Jack Daniels and Hennessy. The online reviews dance around on the two extreme ends of spectrum: You can either love or hate this place. 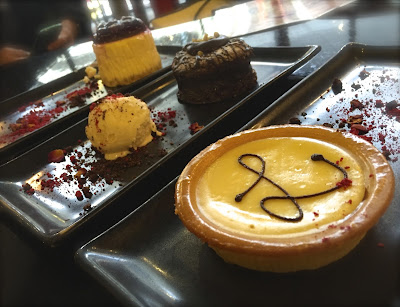 We were enticed into Heirloom by an unassuming A4-size poster showcasing its selection of desserts sold at off-peak special price. And what a pleasant serendipity! Like an oasis of serenity within an urban jungle, the usually loud Japanese Tapas bar is unusually quiet during the 3 to 5 pm slot when majority of the populace is trapped in their business suits and confined offices. Each patron is given both undivided attention and uninterrupted private space. Nostalgic anime from the Japanese award-winning Studio Ghibli is played on the large screen: Sometimes, it is the Chubby Totoro standing under the rain. Sometimes, it is the thirteen-year-old Kiki performing her exceptional Takkyubin delivery service on flying broomstick. 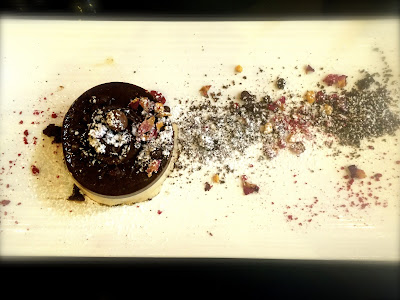 The desserts are basic yet delightful. The honey crunch mousse is light and fluffy, topped with beautiful ganache and its essential crunchy elements. The chocolate walnut fudge is creamy with an enjoyable buttery texture. The lemon tart is delicate, moderately sweet with a slight hint of tanginess. The mixed berry cheesecake is pleasingly smooth and comforting. Each dish is artistically plated and will definitely put a smile on your face. And with an attractive rate of $5 each, I guess it is only natural that we are hopelessly hooked to this place. 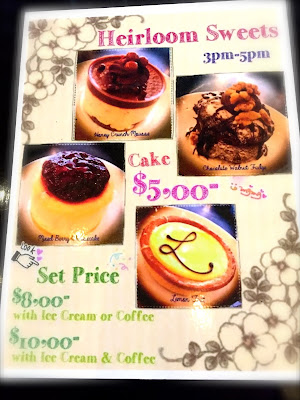 Email ThisBlogThis!Share to TwitterShare to FacebookShare to Pinterest
Labels: Food, Where To Go, Within CBD 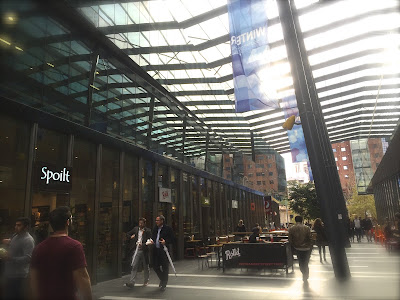 Those were the days where voluminous mop-top haircut and curved-hems bell-bottom jeans were leading the fashion; Bikini and mini-skirt attracted unprecedented popularity and an equal measure of disapproval; Women in their beehive hairdos danced to the beat of Elvis Presley’s “It’s Now or Never”, and children sang about their favourite things to the Sound of Music’s tune. It was the classic Sixties, the era where Beatlemania was a new phenomenon, lasted for almost a decade and still rang an echo today. 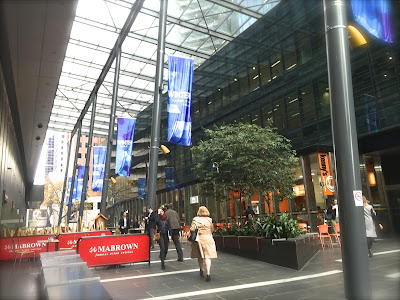 14 June 1964 is a very unusual Sunday in Melbourne. A massive troop of 20,000 hysterical youngsters gathered at the corner of Bourke and Exhibition Streets. They screamed insanely and chanted frenetically. Some collapsed in their overexcitement, some cried frantically in distress. Many attempted to launch a siege on the Southern Cross Hotel, and many more devised secret plans to intrude the premises. Police cordon was assaulted. Stretchers were used to carry fainted teenagers away. It was a mayhem, a chaotic scene resulted in many injuries, a perplexed occurrence beyond comprehension. When the Beatles appeared on the balcony of the hotel waving to the fanatic fans, all hell broke loose - All for a glimpse of the sensational rock band from Liverpool. 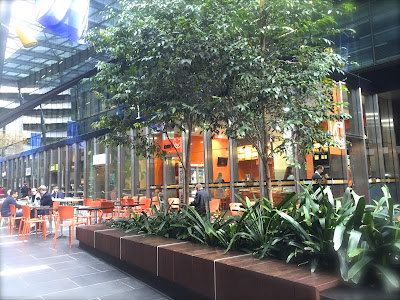 The once glamorous Southern Cross Hotel was eventually demolished in year 2003, and is replaced by the modern office premises nostalgically named the Southern Cross Tower. Sandwiched between the two glistening translucent glass towers is the contemporary-style atrium with its classy glass roof and dynamic trading space. 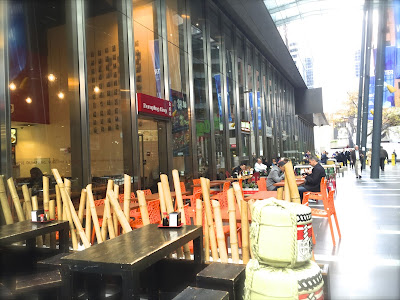 Despite its name, the Southern Cross Lane lacks all usual characteristics of a typical Melbourne laneway. There is no vibrant street arts, huge wheelie bins, or secret jazz club in sight. Instead, the Southern Cross Lane is a wide passageway with airy and bright environment. It is stylish and chic, occupied by few of the most highly recommended cafes, eateries and bakeries in town. The renowned Axil Coffee Roasters and its seasonal espresso blend, Joy Cupcakes and its gourmet-style experiment of sweet flavours, the famous Mabrown and its signature spicy sweet quail – this is the place where serious food connoisseurs found their serendipity of surprises, and trendy hipster could enjoy a moment of peace amidst the urban noise. 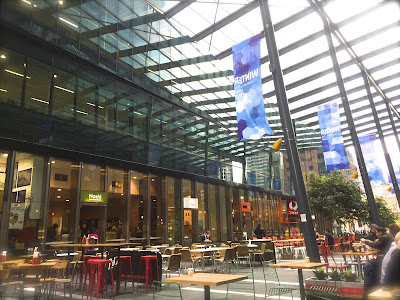 Email ThisBlogThis!Share to TwitterShare to FacebookShare to Pinterest
Labels: Free Admission, History, Lanes and Arcades, Where To Go, Within CBD

Eureka Skydeck (and the fight for liberty) 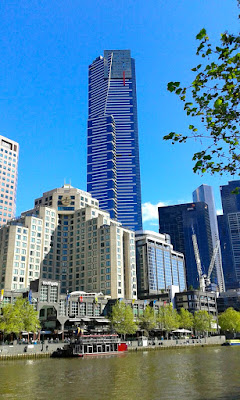 They were the inferior diggers, the underdogs covered in dust and dirt. They were the victims of oppression, police corruption, and unfair treatment of all kinds. They were the gold miners that dined like paupers yet harbored big dreams. They stood close in solidarity, revolted audaciously, and left a legacy of “mateship”. They displayed open contempt against injustice and challenged the unjust system without fear.

The discontent and defiance culminated in an historic rebellion in December 1854, where 10,000 men assembled and witnessed the unfurling of the white and blue Southern Cross flags at a place called Eureka. Oaths were taken, clashes ensued, and 22 of the courageous defenders were killed. Despite the casualties and tragic bloodshed, the Eureka Rebellion was a victory in disguise. The aftermath of it saw the abolition of coercive licensing laws, granting of voting rights and political representation on the Legislative Council for the miners. 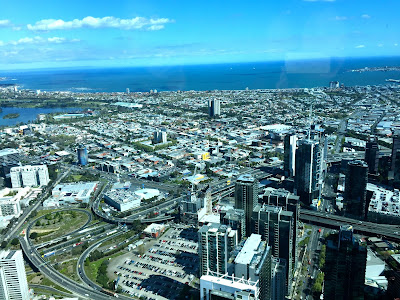 Today, the uprising at Eureka is remembered fondly as an important milestone of democracy and freedom, the two fundamental themes cherished dearly by Australians. Eureka flags were waved frantically from time to time as a gesture of protest and symbol of radicalism. The event gave its name to Melbourne’s highest skyscraper and inspired the architectural design of the tower. From afar, its massive carat gold plated crown and the oddly placed streak of red are unmistakable reminders of the bygone era of gold rush and blood split. Its blue glass structure and white horizontal lines are a nostalgic resemblance to the colours of the controversial flag spearheaded the significant revolt.

The building was once the world’s tallest residential tower when it was first completed in 2006, till the accolade being stolen away by its high rising rivals in Dubai. Its skydeck at the 88th floor proudly holds the title as the highest public vantage point in Australia, and its elevators are still the fastest in the Southern Hemisphere. Avoided by acrophobic and shunned by the faint-hearted, Eureka Skydeck offers a heart-throbbing view of Melbourne from the trembling height of 285 metres above sea level. 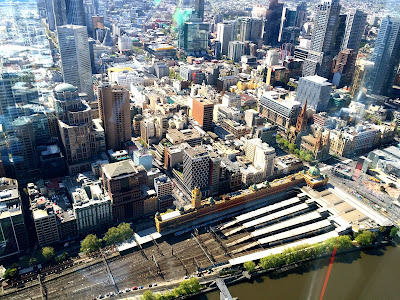 It was a dazzling experience, a surreal panoramic visual stimulation, and a stunning sight from an unimaginable perspective. The skydeck offers a fresh view of various Melbourne’s landmarks; Melbourne Cricket Ground was a tiny doughnut of cool blue shade, and the old-style Flinders Street Railway Station was a massive centipede with a fancy hat of dome. For the true adventurers, you might desire a taste of stepping into a giant glass cube (affectionately called “the Edge”) suspended mid-air and have your adrenaline level tested straight after. 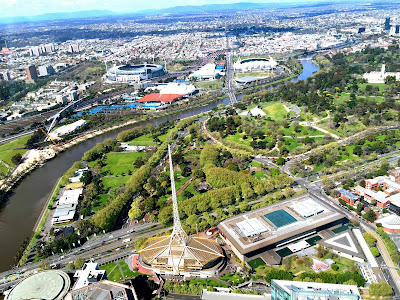 Email ThisBlogThis!Share to TwitterShare to FacebookShare to Pinterest
Labels: Architecture, History, Inner Melbourne, Where To Go, Within CBD 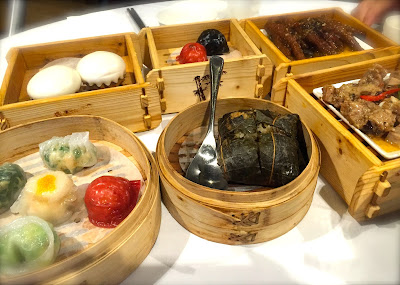 It is an old-time habit brought in by the Southern China sojourners and Cantonese migrants, an obscure culture intertwined with secret codes and silent etiquettes. It is a banquet of dainty bite-sized cuisine served in bamboo steamed baskets or tiny white porcelain plates, a celebration where sharing of food is the norm and tea pouring for others is a convention. A gesture of knuckles tapping conveys the most heartfelt appreciation, and leaving a teapot lid ajar is a polite request for tea refill. This is the Yum Cha custom, a Chinese heritage almost equivalent to the Spanish Tapas and Japanese Izakaya tradition.

The city of Melbourne has no lack of interesting venues for such Dim Sum extravaganza. Most are simple restaurant establishments practising lightning quick service, where customers are ushered urgently to their seats and pre-cooked food is placed haphazardly on the table without giving the patrons a chance for breath. Waiters are usually rude and abrupt. Dish presentation varies, quality of food wavers like the unpredictable Melbourne’s weather. High customer turnover is the priority of each day. Bills are sent over in arrow speed, but no time could be spared for customer feedback. 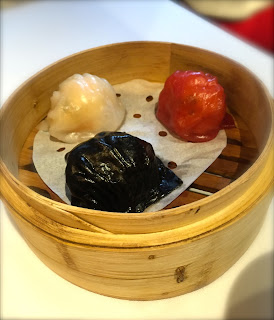 Just when we are about to get used to the complacent treatment, lukewarm service and the occasional mediocre food, Secret Kitchen arrives as a keen contestant and well-qualified rival. Within a few months since its commencement of business in the CBD, the swanky-looking double storey restaurant has evolved from an unknown newbie to a well-known eatery jam- packed with patrons. Reputation spread and popularity gained, yet the service remains attentive, albeit with an added touch of rough efficiency common to most Chinese restaurants. 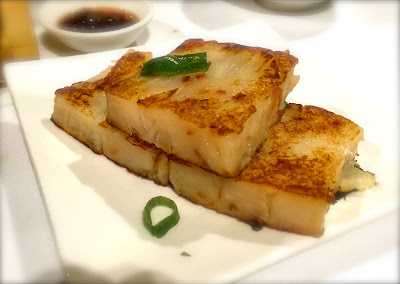 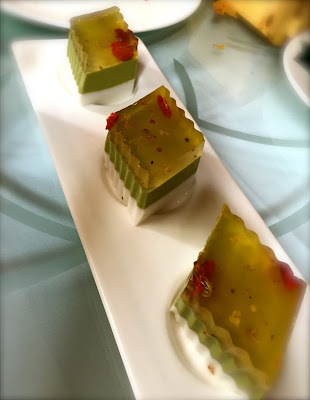 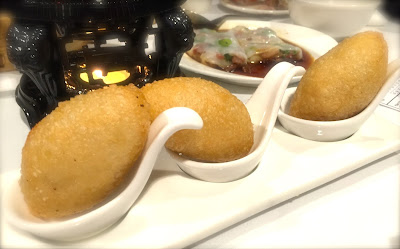 At a time when myriad of Dim Sum places are mushrooming around the town and when customers’ loyalty is constantly being taken granted for, dining at Secret Kitchen is a rare refreshing experience. Price wise, it is slightly above average on the spectrum (most dishes are priced at $8.80 or above). Yet taking into consideration of the food quality and the warm atmosphere, Secret Kitchen is a true winner by virtue of comparison, at least for now. 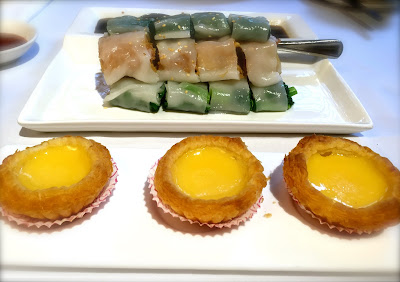 Website:
http://www.secret-kitchen.com.au
Posted by Melbourne, Mama & Toys at 06:34 No comments: