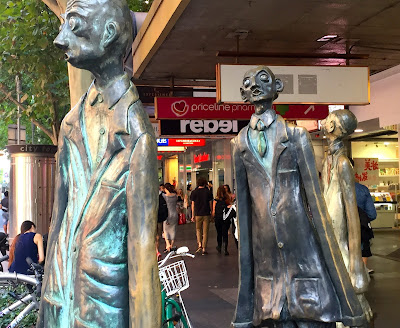 At the corner of the extremely busy shopping district of Swanston and Bourke Street, stand three distinctive life-size bronze sculptures. Three tall, skinny, bald men in business suit carrying their old-fashioned lunch boxes, waddling around with their mouths half-open in confusion. Their unnaturally large alien-like eyes look straight ahead at the hustle bustle of the city life in bewilderment, like some out-of-space creatures accidentally stumbled upon the queer hectic world of the homo sapiens.

Tourists exclaimed in excitement and demanded for photographs with the whimsical sculptures, wrecking their brains for fanciful poses with the quirky men. Some held their “free-of-lunch-boxes” hands affectionately, as if they were making some futile attempts to guide the perplexed men back into reality. Some mischievously inserted cigarette into the pursed lips of one of those poor motionless men, while hugging the wiry figures tenderly with sweet loving smiles.

The peculiar sculptures reminded me so much of the distorted face in the famous painting “The Scream” by the Norwegian artist Edvard Munch. I wonder whether the creation of the three businessmen artwork was also prompted by the same kind of strong emotions of anxiety, melancholy and near-insanity.

Below are some of the interesting facts concerning the eccentric art piece:

And it’s called “The Three Businessmen Carrying Lunchboxes”. The sculptures were created by artists Alison Weaver and Paul Quinn in 1993, representing three human beings being “trapped in the perpetual motion of consumerism”.

The three fanciful figures are called Batman, Swanston and Hoddle, named after the three Melbourne pioneers.

John Batman (1801-1839) is known for his successful endeavor in establishing the settlement on the Yarra River, which became the city of Melbourne today. But he was also a notorious figure who negotiated the controversial Batman’s treaty with the Aboriginal people in 1835; For 600,000 acres of Melbourne land, Batman paid the laughable price in the form of a quantity of blankets, knives, tomahawks, scissors, looking glasses, flour, flannel jackets, suits of clothes, handkerchiefs and shirts. He was known as a rogue, a thief, and a liar. He died young as a result of syphilis.

Charles Swanston (1789- 1850) was a banker and is best known for his role in acquiring the Port Philip District (the present day Victoria) together with the Batman team. Swanston has been dubbed the "unluckiest man", having involved himself in numerous unsuccessful investments including the Batman land deal (which was declared invalid subsequently by Governor Bourke) and losing of substantial fortunes during the depression in the 1840s. Swanston sailed to San Francisco at the age of 60 in the quest for gold investment, but died on his return journey to Australia about a year later in 1850.

Robert Hoddle (1794-1881) was a surveyor of Port Philip District, and the creator of the amazing Hoddle Grid, which forms the present street layout of the inner city of Melbourne, covering the area from flinders Street (of the south) to Queen Victoria Market (of the north), and from Spencer Street (of the west) to Spring Street (of the east).

Thus the three pioneers, now standing at the junction of Swanston and Bourke Street, are constantly looking shocked and baffled by the way the city has grown since they have first founded it centuries ago. 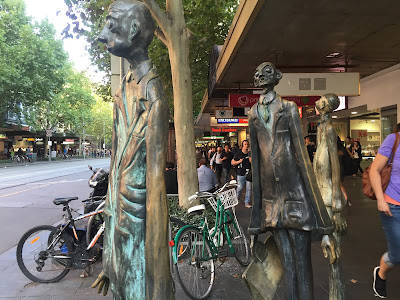 The sculptures were apparently a gift to the City of Melbourne from the Republic of Nauru in 1994 in conjunction with the city’s 150th anniversary. Almost a decade later, Australia presented the Nauru government hundreds of refugees as “gift in exchange”. The irony of that all!