It is unbelievable that someone would ever think of placing such an ancient clock with an history of 130 years at the top of two huge rectangular digital full screens of moving advertisements. It is even more difficult to comprehend the rationale of positioning an age-old clock at an unnoticeable corner of a covered station concourse. 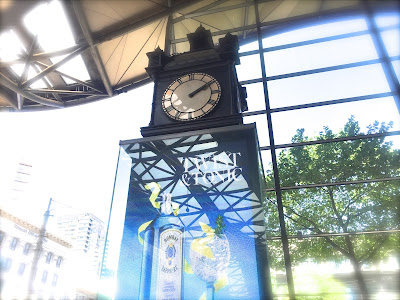 Everyday, we see thousands of Southern Cross Station commuters walking past the supposedly iconic clock at the Collins-Spencer intersection entrance without a pause, completely unaware of the clock's historical significance or even, its existence.

The origin of its name is obscure and probably unknown. We have no idea why the clock is called the "Water Tower Clock", and a research on internet came to a dead-end. The brightly-lit video screens with constantly changing images completely overshadow the pathetic old clock. The clock fails miserably to achieve any fame or popularity comparable to the famous Flinder Street Station clocks. It devoids any Middle Eastern's charm or exoticness like the Forum Theatre clock, and definitely lacks the showiness of the strategically-located GPO clock. 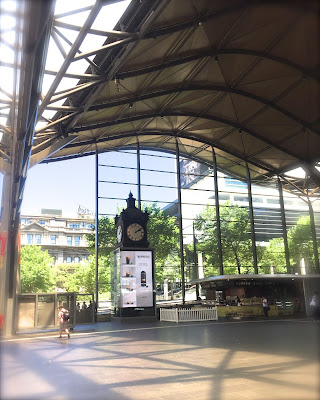 The Water Tower Clock was built in 1883. Since then, it has travelled around like an unwilling nomad searching desperately for a permanent home. It was first installed at the original Flinders Street Station, serving an important role as a reference time piece, keeping timetable and signaling on track. In 1902, it was removed to the Princess Bridge Station, and subsequently the Spencer Street Station in 1910. It remained there for 57 years. The clock changed hands again and fell into the realm of private collectors for many years.

The State Government purchased the clock in the end. But instead of reinstating its role as a station clock, the Water Tower Clock was asked to share its dwelling in the Science Museum at Spotswood instead. This remained to be so for a good many years from 1997 to 2013. Eventually, attempts were made to restore the clock to its previous glories. This was finally done on 14 May 2014, when the clock was installed at its present location. The outcome, as I have mentioned, was such a disappointment many view it as an insult to the much treasured antique. 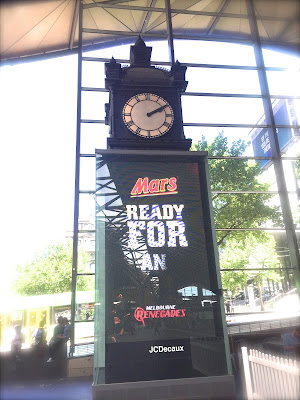 It's an undesirable dilemma to choose between revenue for coffers and a dignified restoration for an old clock. But until measures are taken to separate the commercially-focused and ghastly screens away from the clock, the Water Tower Clock would have to continue enduring the undeserved neglect and living under the shadows of the soul-less LED displays.

Where: Southern Cross Railway Station, near the Collins Street and Spencer Street corner

Email ThisBlogThis!Share to TwitterShare to FacebookShare to Pinterest
Labels: Architecture, Art, History, Where To Go, Within CBD