The Great Melbourne Star- and its not-so-great past

This giant Ferris wheel can be seen from afar around the vicinity of Docklands. It prides itself as the only giant observation wheel in the Southern Hemisphere, with a unique and distinguished design of a seven-pointed star symbolizes the Australian flag. Surrounded by joyful carousel, tea cups ride and colorful circus train, the marvelous Melbourne Star is (supposedly) a representative of all things fun and whimsical. Its 21 air-conditioned cabins carry visitors for a 30-minute "tour" to see the best views of Melbourne, day and night, both modern skyscrapers and natural skylines. 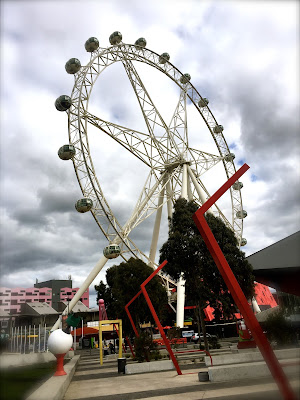 Yet beneath that glorious facade, things were far from being a bed of roses. Initially known as the Southern Star, this massive structure doesn't appear to be able to attract the necessary visitors flow to the very silent Docklands town. The original construction ran 2 years behind schedule. When the wheel was finally unveiled in December 2008, it was compelled to shut down 40 days later when major cracks were discovered by a LED lighting installation contractor. Some serious structural defects (details unknown) were later identified. The original wheel was scrapped and sold, but the main support columns and passenger cabins were salvaged and reused.

Further issues arose. A worker suffered minor injury when the wheel broke free during the reconstruction process. After numerous hiccups and bumps and delays, the great wheel was reopened on 23 December 2013 (after 5 years since the shut down). But lo and behold, a cracked window was discovered within the third day. Thankfully, this time, the damage was said to be a "minor cosmetic issue", and really there was nothing to be alarmed about. 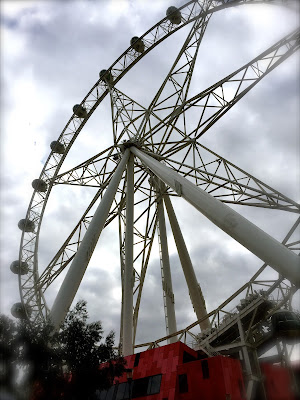 The wheel still turns and runs today. From reported news, there are quite a few pending law suits from various parties (either directly or indirectly) related to this observation wheel of a dramatic past.

It's a real shame that the Melbourne Star could not achieve the same popularity and acclaimed status as the London Eye or the Las Vegas High Roller. Nevertheless, the Melbourne Star is a beautiful structure with a one-of-its-kind design that sets itself apart from its worldwide counterparts. We wish the wheel all the best, and hopefully one day, it will be given more attention and a better reputation than it deserves. 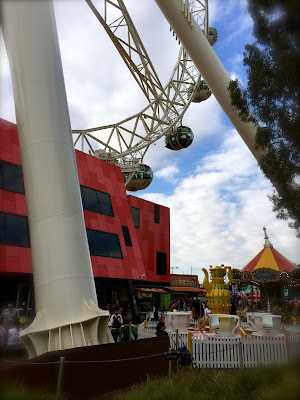 Email ThisBlogThis!Share to TwitterShare to FacebookShare to Pinterest
Labels: Architecture, Outside CBD, Where To Go, Within CBD