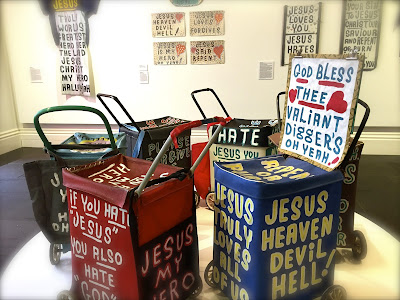 Street preaching, an unenviable vocation amidst the secular urban space, bearing both glad tidings to the willing souls and noisome message to the stonehearted. The unordained and unaffiliated status of the preachers is often frowned upon by the denominations and orthodox. Their (sometimes) rowdy voices irritate both common atheists and street traders alike. Their uncompromising call for repentance is often ill received, and their gloomy prediction of death and hell attracts insults and abuses.

Yet some chose to tread along the undesirable path. One of whom is Desmond Hynes, the faithful yet somewhat eccentric man who spent three decades proselytizing at the thoroughfares of Melbourne city. He was a familiar fixture frequently seen in the immediate vicinity of Bourke Street Mall, the Melbourne Cricket Ground (MCG) and the Flemington Racecourse. Like a modern day Jeremiah, he sang praises to God and condemned sins at market places and vibrant street walks. 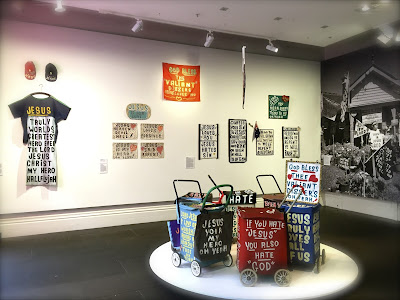 It was difficult not to notice Desmond Hynes and his evangelizing activities. His hand painted placards and signature Jesus trolleys joyously screamed for attention wherever they arrived with an occasional playful “Oh Yeah” inserted alongside the heartwarming and solemn slogans. Utilizing materials gathered from op shops and unwanted objects, the freelance street preacher prolifically created numerous visually stimulating, albeit unrefined, typographic artworks.

Bold, rudimentary uppercase letterings in huge-sized san-serif font were drawn unrestrictedly with enamel and acrylic paint on cardboard, fabric, plastic, canvas and T-shirts. The words conveyed were urgent and imperative. Exclamation mark and single underline were liberally used throughout the brightly coloured final products for emphasis purposes. Desmond Hynes travelled around with his famous shopping trolleys and visibly signs, giving out both impromptu and planned sermons for passersby within earshot.

Describing himself as a former gambler and fornicator, Desmond Hynes is eager to publicly testify to his life changing experience and fulfill a vow well kept since the episode of bowel cancer scare in year 1986. It was a wonderful sight of a passionate sinner turned believer insanely yet zealously professing his love for the Saviour openly with no fear of ridicule. The acts were amateurish and slightly rough-edged, but sincere and utterly moving. 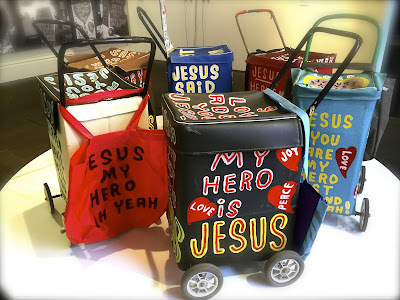 The Jesus Trolley: 30 years of Desmond Hynes pushing art and Jesus on the streets of Melbourne